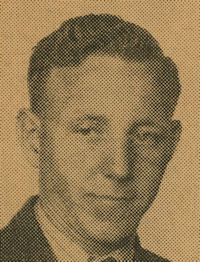 – 19 years old, is the son of Mr. and Mrs. Carl Schomaker, southwest of Perry. He was born in 1921 near Perry and attended the West Lawn school in that community and the Lutheran school.

He played on the high school basketball team in the position of forward in 1937; was a member of the wrestling squad in 1937-38 and 1938-39 and has been a member of the track team for the past three years. He has won an award in track.

In 1937 he was captain of the Junior Police. His hobby is hunting.

Fred Schomaker, son of Carl and Emile (Wilde) Schomaker was born July 31, 1920, in Perry, OK, and graduated from Perry High School with the class of 1940.

He entered the service with the Oklahoma National Guard 45th Infantry Division and served during World War. II as a Master Sergeant and Forward Observer in the European Theatre Operation. He received the Silver and Bronze Service Stars and was a Prisoner of War in Germany. He later served in the reserves and had a total of 19 years of service.

On November 30, 1947, he and Rose E. Steffens were united in marriage in St. Pauls Evangelical Lutheran Church, Fairland. He worked 35 years for Amoco Oil Production Co. in Oklahoma, Kansas, and Texas until retirement in 1980 when he and Rose moved to Fairland.

He was a member of the St. Paul Evangelical Church and served several years as trustee of the Congregation. He was also active in the construction of St. Paul Christian Activity Center and a member of the Lutheran Laymen League, the American League, and Ex-Pows.