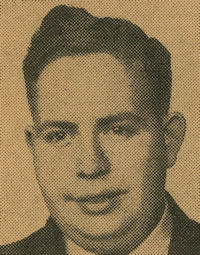 In 1936-37 he was a member of the Perry high school basketball team, playing forward. He received an award for perfect attendance in 1938-39. Jimmy’s hobby is stamp collecting.

He is a Life Boy Scout and is working on his Eagle badge.

Funeral services will be 3:00 p.m. Thursday, April 29, 1993, at the First Baptist Church of Noble. The Rev. John Allen will officiate with burial in Arlington Cemetery. Mayes Funeral Directors in charge of arrangements.

Mr. Ramsey was the son of Harry and Mary Secoy Ramsey and was born January 14, 1921, at Perry, Oklahoma. Following his graduation from Perry High School in 1938, Mr. Ramsey started working for the Perry Daily Journal and, after 15 years, moved to Lawton where he worked for the Lawton Constitution from 1951-1953. In 1953, he became an employee of the Oklahoma Publishing Company, retiring in 1983 after 29 years.

Mr. Ramsey married Virgie “Vee” Bishop June 23, 1950, at Guthrie, Oklahoma and they have resided in Norman since 1979, moving from Midwest City.

Mr. Ramsey was a member of the First Baptist Church at Noble and was a veteran of the United States Army, serving during WWII.

Preceded in death by his parents, a half-sister and two half-brothers, Mr. Ramsey is survived by his wife, Vee, of the home in Norman; a daughter, Ginger Waller of Moore, Ok.; 4 grandchildren, Kip, John, and Dustin Kerley, and Kim Goodman; and 4 great grandchildren, Blake Goodman, Jordan Kerley, Brandon Goodman and Kody James Kerley.

The family has suggested memorial contributions to the Oklahoma Veterans Center, P.O. Box 1668, Norman, Ok 73070 as appropriate for expressions of sympathy.