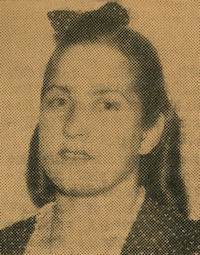 ﻿- daughter of Mr. and Mrs. George L. Butler and is 18 years old. She lives at 620 Seventh street. Ellen was born in Oklahoma City February 8, 1922. Before attending the Perry schools she went to the Okmulgee schools.

Ellen has been a member of the Order of Rainbow for Girls for five years and a member of the Student Council for three years. Her hobbies are dancing, reading and all sports.

She took first place in cornet in the Tri-State Band festival held in Enid in 1938-39, first place at Winfield, Kans. in 1939 and has lettered in band.

Next year she plans to attend Oklahoma A. and M. college in Stillwater where she will study music in order to make her career professional music.

Ellen was a gifted musician, playing the coronet. She won many competitions as a soloist. She was then awarded a music scholarship to Oklahoma State.

Ellen then formed her own band and traveled nationally. Her travels took her to Biloxi, MS where she met and married Bob. After Bob returned from World War II, they moved to San Diego. While in San Diego, they, along with her brother-in-law and wife, opened the Villa Restaurant located in Pacific Beach. After many years, she began working at Vacation Village and then The Sheraton. While there, she earned many awards including Employee of the Year. Ellen was also a member of the Mission Bay Women’s Golf Club where she made many wonderful friends.

She is survived by her daughter Carole Montejano of La Mesa, son Robert A. Petrucelli of San Diego, and two grandchildren.