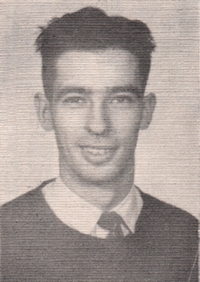 Joseph “Joe” Rodger Williams, 86, of Perry, Oklahoma, was born on February 19, 1927 in Okemah, Oklahoma to Julian and Ethelyne (Lewis) Williams. He passed away on Saturday, October 5, 2013 in Perry, Oklahoma.

In 1943, at the age of 16, Joe enlisted in the United States Navy. He served until the end of the war. After serving his country, Joe returned home to finish high school. He also attended Oklahoma State University for two years.

Joe was active in his sons’ sports clubs while they were in school. He was also a member of the Presbyterian Church and the Veterans of Foreign Wars (VFW).

A private family service will be held. Services are under the direction of Brown-Dugger Funeral Home in Perry, Oklahoma.

He was preceded in death by his wife, Shirley; parents, Julian and Ethelyne Williams; and sons, Dale Evan Williams and Max Bryan Williams.