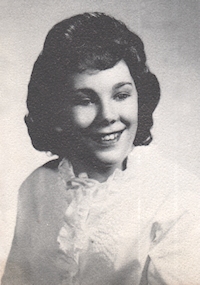 Gloria Jean Frazier, 66, of Perry, Oklahoma, was the daughter of Marshall and Sindy Alice Buffington Frazier Sr. She was born on November 9, 1944 in Vinita, Oklahoma and died on Thursday, October 6, 2011 at Grace Living Center in Oklahoma City, Oklahoma.

She graduated from Pioneer High School in 1963. She worked at Charles Machine Works and retired in 2000. Gloria enjoyed collecting dolls and watching wrestling when she was not traveling or shopping. Cooking Sunday dinner for her family and friends was one of her favorite things to do. She will be remembered as loving sister, aunt and great-aunt.