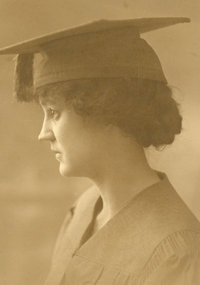 Funeral is set for 2 p.m. Wednesday at the First United Methodist church with Rev. Cortez Cranfill, pastor, officiating. Burial will be in Grace Hill cemetery under direction of Brown Funeral home. Memorials may be made to Judith Karman Hospice of Stillwater or the charity of the donor’s choice.

Mrs. Kemnitz was born in Indian Territory, 10 miles southwest of Perry, on Nov. 5, 1900. She was the daughter of Robert and Isabelle Johnson. She attended Lawn View and Harmon schools in rural Noble county and later taught at Lawn View.

She and George Kemnitz Sr. were married at Perry on April 7, 1923. Mr. and Mrs. Kemnitz lived in Houston, TX, and Tulsa before returning to the local area in 1957.

Mrs. Kemnitz was a member of the United Methodist church, United Methodist Women, Marigold Garden club, Order of Eastern Star and the Noble County Republican Women and had been a Girl Scout leader.

Mrs. Kemnitz was preceded in death by her parents, husband, one son, George Jr.; five sisters and one brother.