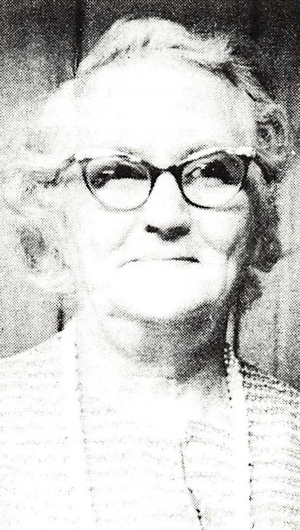 Funeral will be at 2 p.m. Wednesday at the First United Methodist church at Perry. Rev. Wayne Brooks will officiate. Burial will be at Grace Hill cemetery under direction of Moore Funeral home of Tulsa. Mrs. Edgar’s body will be at the church from 10 a.m. Wednesday until service time.

Born at Orlando, July 7, 1909, she was the daughter of Robert and Isabella Johnson. She attended rural schools in the Orlando community and attended Oklahoma State University. She received her teaching certificate from Phillips university.

Following her retirement, Mrs. Edgar moved to Laverne to make her home with her son Jack, and his family. In 1978 they moved to Collinsville. She was a member of the United Methodist church at Perry.

In addition to her son, Jack, of Collinsville, survivors include another son, Max Edgar, of Enid; a brother, Buck Johnson, Perry; two sisters, Betty Kirkhart and Bertha Kemnitz, both of Perry; and five grandchildren.