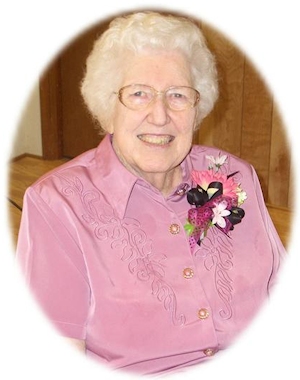 Ilene was born in Perry and has received all her schooling here.

She has been a member of the Red Hots pep club, Student Council, and the Order of Rainbow for Girls. She was drill leader of Red Hots this year and is to receive a service pin in Student Council.

In her sophomore year she won first in the doubles matches in the northers conference tennis tournament at Blackwell.

After graduation she may work in Tulsa.

Ilene Delcenia Mittasch of Perry, Oklahoma was born July 7, 1925, to Henry O. Pricer and Lottie (Haskell) Pricer in Perry, Oklahoma. She passed away on May 25, 2011, at Perry Memorial Hospital at the age of 85.

Ilene attended school in Perry and graduated in 1943. She married Mac Frank Mittasch on July 27, 1943, in Pawnee, Oklahoma. When Mac was called to serve in World War II, Ilene went to Wichita and worked in an airplane plant and for Kellogg’s cereal plant. After Mac returned home they made their first home in Perry. They later moved to Sumner rural community and then to rural Morrison in 1963. After Mac passed, in 1971, Ilene remained on the farm until 1976 when she moved to Perry where she lived until her death.

Ilene loved to play tennis as a young girl. She loved to go fishing and playing with her grandchildren.

Funeral services will be 10:00 a.m. Saturday, May 28, 2011 at Brown-Dugger Funeral Home Chapel, Rev. Martin Foster will officiate. Interment will be at Grace Hill Cemetery.

She was preceded in death by her husband; parents; brother, Willie Pricer and sister, Clara Bunch.