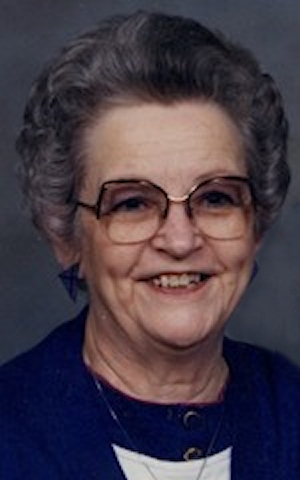 Lois will lie in repose at the church for one hour prior to the service, where the family will receive friends from 1:00 to 2:00 p.m.

Lois was born February 18, 1924 in Chicota, a daughter of Cecil and Carrie Bertha Hodgin Kennedy. She graduated from Chicota schools, and received further training in Ponca City, Oklahoma in aircraft construction. She worked for the John E. Boyer Company in aircraft assembly, and later for the Douglas Aircraft Corporation from 1942 to 1944, doing her part in the war effort. She was a member of Grace Lutheran Church in Paris, and was a LWML officer for many years. She enjoyed playing bridge, was a wonderful seamstress and artist, and was adept in any sort of handwork, including crochet and embroidery. Her greatest joy, however, was her loving care for her family.

In addition to her husband she was preceded in death by her parents, a sister, Geraldine Kindschi, and a brother, Billy Joe Kennedy.

If desired, memorial contributions may be made to The Alzheimer’s Alliance of Northeast Texas, 211 Winchester Street, Tyler, Texas 75701; or to Grace Lutheran Church, 739 19th S.E. Street, Paris, Texas 75460.