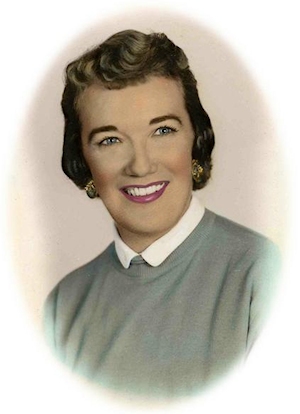 ﻿Daughter of Mr. and Mrs. Frank M. Jones, 711 Delaware, Patricia Ann Jones has been especially active in extra-curricular work in Perry high school. She was football queen last season, was on the student council two years, in the band three years, a member of the Perryscope staff, student director of the band, treasurer of Teen Town, a member of Teen Town council, and one of the senior play cast.

She was born March 17, 1927, in Perry, and attended grade school at St. Joseph’s academy. She is in Kappa Teen sorority, and is a member of the Catholic church.

This student is counting on going to Oklahoma A. & M. college at Stillwater after graduation this spring.

Patricia A. Sewell, 79, of Wichita, Kansas, formerly of Perry, Oklahoma, was the daughter of Frank M. and Elsie M. (Rueb) Jones. She was born on March 17, 1927 in Perry, Oklahoma and died Wednesday, March 22, 2006 at the Catholic Care Center in Bel Aire, Kansas.

Patricia was a 1945 graduate of Perry High School. She enjoyed playing golf, sports and her dogs. Patricia was an Oil and Gas Land Lady. She was a member of the St. Rose of Lima Catholic Church and the Kansas Women’s Golf Association.

She was preceded in death by her parents, one brother and one sister.