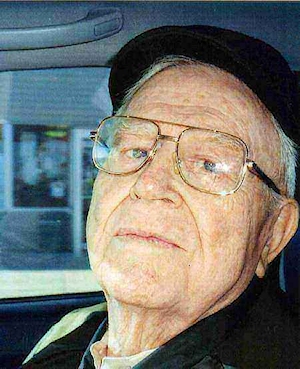 He was a 1934 graduate of Perry High School and received his accounting degree from Oklahoma A&M in 1938.

In the 1930s, he was a catcher for the Perry Sandlot Team. While at Oklahoma A&M, Frank was a member of the schools baseball team and played the cornet in the band.

He and the former Alberta Cress were married on June 12, 1940, in Perry, Oklahoma.

Frank served in the United States Navy from November 10, 1942, until February 17, 1946, and earned the rank of Lieutenant before he was honorably discharged.

He was a Certified Public Accountant and was involved in the insurance business in Perry, where he co-owned and operated Ley-Andersen Insurance with his long-time partner, Howard Andersen.

Frank was a life-long sports fan and was a member of St. Rose of Lima Catholic Church, the Knights of Columbus, the Perry Elks Lodge and the Perry Lions Club.

In addition to his wife, Alberta, who died on June 20, 2003, his parents, two brothers, Donald J. Ley and Dr. Eugene B. Ley, and one sister, Mary G. Kehres, preceded him.