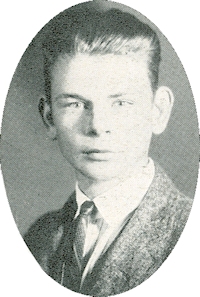 “When ignorance is bliss
‘Tis folly to be otherwise.”

Lighty was the son of Edgar and Ida Lighty and was born at Chatsworth, Nov. 15, 1905. He attended school at Lucien and Perry and graduated from Perry high school. Lighty also attended Ponca City Business college.

He farmed, had worked at local service stations and was a 15-year employee of Morrow Service company of Perry. He was a member of the Calvary Baptist church.

In addition to Mrs. Lighty, of the home at 202 Fir avenue, survivors include two sons, Donald Lighty, Mulvane, Kan.; and Everett Lighty, Perry; two sisters, May Lau and Ruby Morrow, both of Perry; one brother, Glenn Lighty, Perry; four grandchildren and six great-grandchildren.

He was preceded in death by one brother.