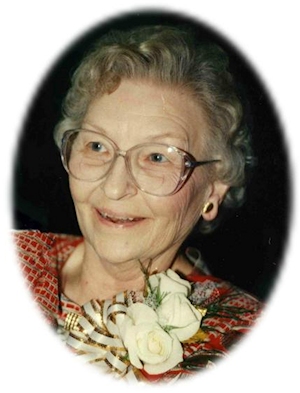 Rose Mary has lived in Perry only two years. Before that she lived and attended schools in Orlando, Lucien, and Marshall.

Rose Mary plans to go to Phillips university in Enid after graduation.

The funeral for Rose Mary St. Clair, 84, of Perry, will be 2 p.m. Saturday, June 13, 2009, at First United Methodist Church, Perry. The Rev. Ed Cook will officiate. Burial will be in Grace Hill Cemetery. Memorials may be made through the funeral home, 1010 N. 7th Street, Perry, OK 73077, to American Heart Association or Alzheimer’s Association.

She was born March 14, 1925, in Lima, Ohio, to Marion Francis and Mary Elizabeth Gilmore Shappell and died Thursday, June 11, 2009, at Perry Memorial Hospital.

She moved to Perry 69 years ago from Shell Camp in Orlando.

She was a homemaker and worked in her husband’s business until she retired in the mid-1990s.

She was active in band boosters, wrestling boosters and football boosters and was a Campfire and Blue Bird leader.

She was a member of First United Methodist Church, Mother’s Club and Petunia Unit of Perry Garden Clubs.

She was preceded in death by one sister.