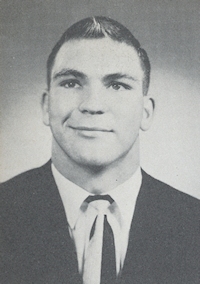 ﻿Frank “Brother” Cutsinger III, 56, 1711 Eleventh street, died at 8:30 a.m. Saturday, July 22, 1995, at his home. Graveside rites will be at 10 a.m. Wednesday at Grace Hill cemetery with Rev. Ed Wunderlich, pastor of Zion Lutheran church, officiating. Arrangements will be under direction of Brown Funeral home. Memorials may be made to the Judith Karman Hospice of Stillwater or the First Presbyterian church of Perry.

He wrestled for Perry high school from 1953-56 and served as co-captain of the mat team in 1955-56. As a senior, Cutsinger wrestled at heavyweight and took third in regional action and fourth in state.

Cutsinger and the former Willetta Wooten were married on July 10,1971, in Perry.

He worked as a dispatcher for an oil firm and trained game roosters.