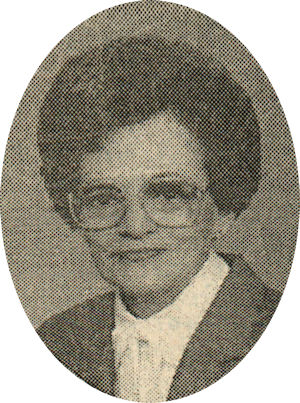 Following graduation, she expects to go to business college.

Doris was a lifelong resident of Perry, she graduated from Perry High School in May, 1936 and Draughon Business School in 1941.

She and Edward J. Brown were married on July 29, 1944 in Casper, WY and during their fifty-one years together, traveled to all fifty states and Washington, D.C.

Before retirement, she worked as a bookkeeper in Perry for Donahue & Mugler, Smith Trucking, Tucker-Loftis Insurance and R. L. Frailey.

She was a member of Christ Lutheran Church, a charter member of Unit V and General League and served many years as a Sunday School teacher and choir member.

She was preceded in death by her husband, her parents, one son Jim and a sister, Opal Elliott.

She is survived by daughters, Alanna Brown, of the home in Perry, and Charlene Brown, Douglasville, GA; her only grand child, Staci Diane Brown, Denver, CO; one sister, Manila Francis, Perry, OK; one brother, Charles Baetz, and his wife, Leona, Dangerfield, TX; and many beloved nieces, nephews and cousins.