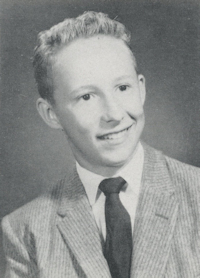 He graduated from Perry High School in 1959, then went on to receive his bachelor of science in education from Oklahoma State University. Despite his alumni status, he remained a staunch Oklahoma Sooners fan all of his life.

He was a wonderful husband, father, and grandfather. He spent his life providing loving support and devotion to his family and friends. He will always be known as an extremely energetic and outgoing individual who was loved by many. He leaves an enduring legacy that will be a beacon of light for all of those he touched.

Mr. Thompson was a very successful football, basketball and baseball coach in the junior high and high school ranks in Edmond, Okla., in the late 1960’s and early 1970’s. During this time, he also served our country for over twelve years in both the Army Reserve and National Guard.

In the mid-1970’s he accepted a position as a sales representative for Fram Corporation. His career took him from Oklahoma to Rhode Island and ultimately to Kansas where he retired in July 2001. Upon retirement, Mr. Thompson again returned to the coaching ranks by instructing his grandchildren in their athletic endeavors.

A visitation will be 9 a.m. Wednesday to be followed by the funeral celebration at 10 a.m. at the Calvary Baptist Church at 8130 Lackman Road in Lenexa. Pastor Brian Albert will be conducting the ceremony.

Burial will follow in the Olathe Memorial Cemetery at 738 N. Chestnut St. in Olathe.