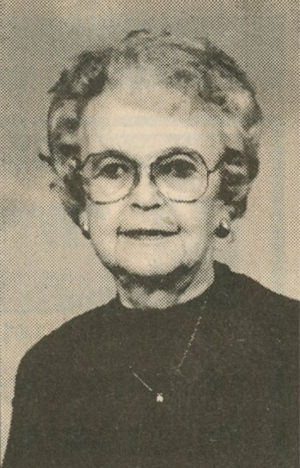 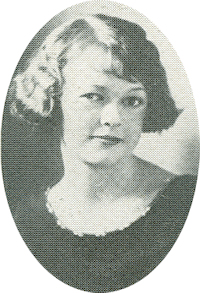 ﻿Forensia.
“How sweet the moonlight sleeps upon the maid.”

Funeral will be at 10 a.m. Friday at the First Presbyterian church in Perry with Rev. Jim Murray officiating. Burial will be in Grace Hill cemetery under direction of Brown Funeral home. Casket bearers will be Steve Bruner, Doug Bruner, Mark Livesay, Steve Guymon, Don Thiery and Darren Freese. Honorary bearers will be Robert Kasper, Harry and Leona Elwell, Wayne Casteel and Gene Wood. Memorials may be made to the American Heart Association or to the Cherokee Strip Museum of Perry.

Mrs. Dolezal was born on March 8, 1906, near Cordell, the daughter of William and Clementina Freese. When she was two years old, she moved with her family to a farm seven miles northwest of Perry. She attended Whipple and Lone Star rural schools in Noble county and was a 1924 graduate of Perry high school.

She graduated from Draughon’s Business College in Oklahoma City, then was employed in the Noble county clerk’s office until her marriage on Nov. 8. 1930, to Joe E. Dolezal Jr. of Perry. The couple established their home at 1111 Seventh street in Perry.

After her husband’s death in 1958 Mrs. Dolezal was employed as a legal secretary for the law firm of Robert L. Kasper and David C. Matthews. She retired in 1976.

In addition to her husband, Mrs. Dolezal was preceded in death by one daughter, Barbara Kaye Bruner, her parents and one brother, Henry Freese.