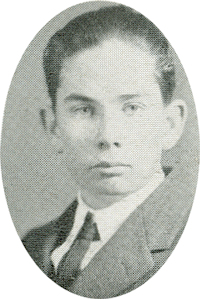 Brace was married to Vesta Springer who preceded him in death in 1987.

Funeral services will be 2:00 p.m. Wednesday, June 11, 2003 at the First Christian Church of Perry with the Rev. Martin Foster officiating. Interment will follow at Grace Hill Cemetery. Services are under the direction of Brown-Dugger Funeral Home.

Memorials may be made to the First Christian Church of Perry, Masonic Charity Foundation, Oklahoma Medical Research Foundation or Salvation Army. All memorials may be given in care of Brown-Dugger Funeral Home.

He was preceded in death by his wife, Vesta, parents, Josiah and Jessie Smith and sister, Carol Ealy.