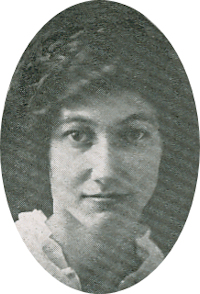 Basketball Team 15-16; Tannhauser Club; Laffin’ Club.
Lenora has been with us just a year.
“I rather think she is aloft.”

Lenora Neal was born at Douglas, Kansas, March 18, 1896. In 1912 she came with her parents to Oklahoma, coming to Perry in 1914. She graduated from Perry High school with the class of 1916. She was active in all the students enterprises, being a member of the basketball team.

After a long, trying illness which she bore with superb courage and commendable fortitude she died January 29, 1927 with sublime faith and peace into the City which by the eye of faith she had seen afar off.

Lenora, as she was always known to her friends, lived a life of sweetness and graciousness. Friends were attracted to her by the lovliness of her soul. With a noble mothers heart she loved, Barbara Jean, though denied by the nature of her affliction many of those little contacts with her which her heart craved. Thinking of others, both in health and in sickness, she gave expression to a character of the finest type. A smile an cheery words greeted every one who visited her in her long illness were helped quite as much as she because of her patience, cheerfulness and fortitude.