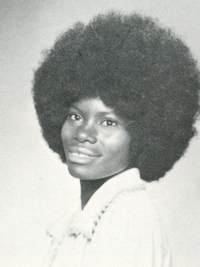 Gwendolyn Faye “Gwen” Tubbs Whitlock, 60, was born in Pawnee, Oklahoma on March 27, 1955 to Lula Tubbs and Bennie Vester. Gwen spent her childhood in Pawnee until moving to Perry, Oklahoma in 1969. She attended Perry Public Schools where she was active in basketball for the Perry Maroons. She graduated from Perry High School in 1975.

Immediately after her school career ended she started working at Green Valley Nursing. After several years of service there, she moved to Wichita, Kansas where she met Larry Whitlock. Gwen and Larry fell in love and joined in to a martial union in 1985. Together they loved life and like having a good time. They were both avid domino and card players that enjoyed to party. Larry passed away in 2002 after a brief illness had him hospitalized. Gwen later met Daniel “Danny” Sparkman and they began a life together. Although she never had children of her own, Danny and Gwen adopted a pitbull dog named Kayla who was like a child to them. Tragedy struck again in 2013 when Danny suddenly had a massive heart attack and passed away. Gwen and Kayla were left to mourn his death.

Gwen was always the life of the party. She loved to party with family and friends. They called her Disco Lady. She could dance circles around anyone. She was a kind, caring, and giving person.