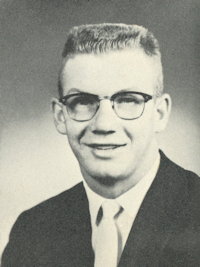 He was born on Dec. 27, 1936, at Perry, Okla., to Arthur and Wilna (Cowell) Milliron. He was raised in Perry and attended school there and was a Perry High School graduate.

He later moved to Enid, Okla., where he attended college. After college, he lived in various communities in New Mexico, working as an X-ray technician in hospitals. He returned to Oklahoma in 1989 to care for his mother. Following his retirement, he moved to Erie.

He was married to Joyce Sutherland for the past 21 years. She survives of the home.

He was preceded in death by a brother and an infant daughter.

The service will be at 11 a.m. Monday at First Christian Church at Erie.

Memorials are suggested to Horizon Hospice and may be left at the church the day of the service or mailed to Joyce Sutherland, 529 N. Main, Erie, 66733.