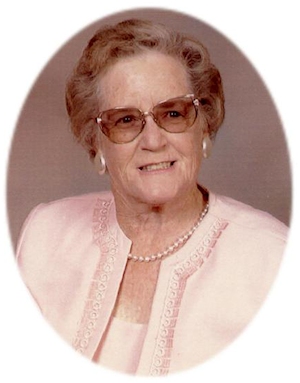 – 17-year-old daughter of Mr. and Mrs. Glenn A. Koch of Compton, Calif., was wrestling queen during her junior class year, and cheer leader of the Red Hots both her junior and senior years in high school here, in addition to being on the student council and on the staff of the Perryscope.

She was born December 28, 1927, in Perry. Her ambition is to attend business college after graduation.

Other activities in which Betty Jean participated as a student of PHS are Order of Rainbow for Girls, RRF social club, Teen Town and National Honor Society. She is a member of the Presbyterian church.

Betty Beasley, 83, of Perry, Oklahoma, was the daughter of Glenn Allen and Ethel Nell (Faunce) Koch. She was born December 28, 1927, at Perry, Oklahoma and died August 5, 2011 at Perry Memorial Hospital.

On May 7, 1998 she married Ellis Beasley in Oklahoma City, Oklahoma.

Betty worked as a secretary and bookkeeper at Dolezal Agency, Dale Wilson Chevrolet, Gilliland-Martin Chevrolet and Ditch Witch, where she retired.

Betty married Foy Eddie Smith in 1969, in Perry. They were married for 25 years.

She was on the first board of director’s for Camp Tan Da Ko. She was also served on the board for the Cherokee Strip Historical Society and Perry Alumni Association.

Betty spent many years helping with the Oklahoma Blood Bank and working on the P.H.S. Alumni Building. She also helped her husband tend to their farm.

Funeral services will be at 10:00 a.m. Tuesday, August 9, 2011 at the Brown Dugger Funeral Home Chapel in Perry, Oklahoma. Rev. Ed Cook will officiate.