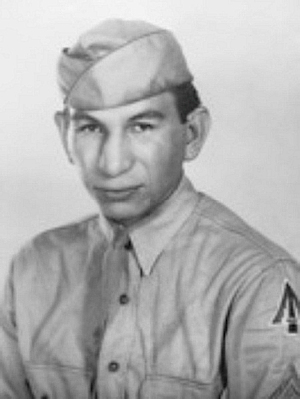 Although he has been a student at Perry high school for only seven months, Louis Faw Faw, Jr. has gained considerable reputation as a vocal soloist. He is the 20-year-old son of Louis Faw Faw, Sr. of Perry, formerly of Morrison.

The Indian youth was born in Red Rock and attended grade school there, as well as at Morrison, and Chilocco Indian school, where he was co-captain of the boxing team.

At Morrison Louis was co-captain of both the football and basketball squads and, in 1941 won first in a statewide baritone solo contest. He is a member of the “Four American” quartet and in 1938-39 was a Boy Scout.

Louis joined the United States Army during World War II at the age of 20 where he served as radio code and voice operator in the 755th Field Artillery Battalion, 10th Armored Division (known as the Tiger Division), part of General Patton’s famed 3rd Army. Just before his battalion shipped out to the front, he took leave to marry his high school sweetheart, Marie Scott, on Dec. 25, 1943 in Waynesville, Mo.

Survivors include his wife, Marie, of 73 years; his daughters, Sharon Luttrell, of Noble and Sandra Faw Faw, of Norman; one son, Steve Faw Faw, of Edmond and was preceded in death by three children, Susan Blair, Shelly West and Stan Faw Faw. Also surviving are grandchildren, Shane Faw Faw, Shawn Luttrell, Sharise Wingfield, Donna Swartz, Helena Jacobe and Jacob Faw Faw; great-grandchildren, Sarah Faw Faw and Lindsay Faw Faw and many nieces and nephews from his beloved siblings, six of whom have preceded him in death.

The family has suggested memorials to the Otoe Baptist Church in Red Rock.