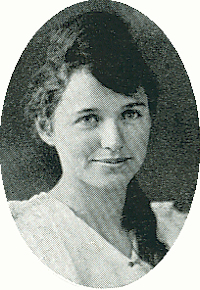 Peroma Staff.
“Not the kind to be out done, but labor to half past one.”

﻿Esther Mae Clark was born on July 23, 1900 in Blairstown, Iowa and was the daughter of Henry Hall and Henrietta Florence (Wilson) Isham. She died Sunday, Nov. 11, 2001 at Perry Memorial Hospital.

She began her education at Rose Hill School near Perry and was a 1918 graduate of Perry High School. After teaching awhile at the Indian Reservation at Perry, she attended Edmond State Normal School at Edmond, OK and Coe College in Cedar Rapids, IA. She was a school teacher in Oklahoma and Iowa.

On Oct. 2, 1924, she and Clarence S. Curtis were married. They were married for nearly 40 years before his death on Sept. 24, 1964. Four children were born of that marriage, Keith, David, Wayne and Arlene.

She and Ernest Clark were married on Sept. 11, 1970. He died in 1973. Her marriage to Ernest brought two stepchildren, Harlan and Landis Clark, into her family.

Her parents, her two husbands, one great-grandson and one nephew preceded her in death.