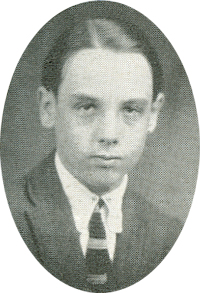 Victor Coldiron, 72,a native of Noble county, died at 7:30 a.m. Thursday in Eden hospital, Castro Valley, Calif., where he had been a patient in the cardiac unit following a heart attack Tuesday.

He was a brother of Kenneth Coldiron, 1008 Delaware street. Mr. and Mrs. Coldiron left Thursday afternoon for California.

The body will be cremated and interment will be at Castro Valley. The Victor Coldiron home is at 20559 Forest, Castro Valley, Calif. 94546.

He was born Nov. 24, 1907 at Billings, the son of Dr. D. F. Coldiron, pioneer Noble county physician, and Mrs. Coldiron. The family later moved to Red Rock where Dr. Coldiron practiced medicine before moving his practice to Perry in 1918.

Coldiron graduated from Perry high school in 1924 and attended Central State and Oklahoma A&M college. He moved to California in 1930 after marrying Nell Wetzel of Perry. The couple had been planning their Golden wedding anniversary later this year.

Coldiron was a quality control officer for Firestone in the Los Angeles area. He moved to Castro Valley following retirement in 1970.

Besides his wife of the home and his brother of Perry, survivors include a sister, Mrs. Kara Eikleberry of Lincoln, Neb.; one daughter, Vicki Coldiron of Lahaina, Hawaii; one son, Terry of Eureka, Calif., and one grandson. One daughter, Daisy Ann, died in 1947.