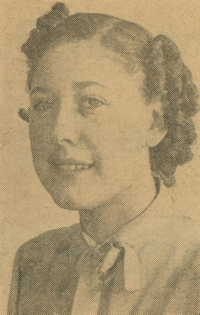 ﻿- was in the band and in the Senior Play this year. She is undecided about the future. She has helped several families with the household work during her high school years. She is a native of Perry and has attended school here all her life except for one year at Braman. She is the daughter of Mr. and Mrs. S. O. Wakeman of near Perry. She likes to skate, dance, play baseball and basketball.

Helen I. Richards, 84, of Cheyenne, Wyoming died Oct. 30 at United Medical Center-West after a long battle with dementia and Alzheimer’s Disease.

In 1939, she graduated from Perry, Oklahoma High School, where she met and married Donald M. Richards on Oct. 22, 1939. They were together for almost 65 years. They moved to Cheyenne in 1942, when her husband went to work for the Union Pacific Railroad. Helen was a devoted wife and mother.

She was a lifelong member of the Moose Lodge. She was known as the “Hostess with the Mostess” by her friends and family.

She was preceded in death by her parents, Scott and Jessie Wakeman; her husband, Donald M. Richards; two sons, Larry Richards and Scott Richards; a grandson, Gary Richards and a sister, Faye Cox.

Services will be 1 p.m. Wednesday at Wiederspahn-Radomsky Chapel of the Chimes with the Rev. Robert Schmidt officiating.

Interment will be in Cheyenne Memorial Gardens.