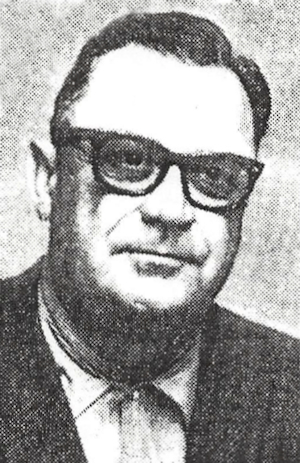 Funeral will be at 2 p.m. Thursday at the First Presbyterian church for Everett T. Frueh, 67, 1706 Tenth street, who died at 10 a.m. Tuesday at Stillwater Municipal hospital. Rev. Don Harnden, pastor of the church, will officiate. Burial will be at Grace Hill cemetery under direction of Parker Funeral home. The body will lie at Parker Funeral home until noon Thursday. Casket bearers will be Harry Elwell, Lawrence Seeliger, 0. J. Moore, Everett Carley, Jack Thompson and LeRoy McCoy.

He was a member of the First Presbyterian church and the Masonic lodge. He was a former member of the Perry city council. He entered Stillwater Municipal hospital Dec. 16.

In addition to his wife, Edna, survivors include one son, Forrest Frueh, Norman; and two grandsons.

Frueh has long been affiliated with the automobile business in the community. He served, as general manager for the local Chevrolet Agency under 0. J. Moore and was sales manager for the present owner. Dale Wilson. For a time he operated his own auto sales firm in Perry. He was semi-retired.

Dale Wilson Chevrolet will be closed Thursday afternoon for the funeral.

A memorial has been established for the First Presbyterian church.