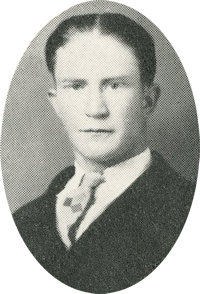 Baseball; Football; Wrestling.
“And his classmates call him ‘Red’.”

Funeral will be at 2 p.m. Tuesday at the First United Methodist church at Ponca City. Burial will be at Grace Hill cemetery at Perry later Tuesday afternoon.

Henry was married to the former Leona Nemec Dec. 31, 1927. He had worked for the state highway department and in 1940 began employment with Continental Oil Cc. He retired in 1972.