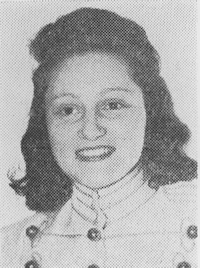 ﻿Band queen in 1942-43, member of the junior and senior class play casts, and member of the Perry scope staff this year are highlights in the high school career of Betty Lorraine Hay, daughter of Mr. and Mrs. David Hay of 911 Jackson.

She was born August 18, 1927, at Shawnee, and attended grade school at Lucien.

A member of the Presbyterian church, Betty is past worthy advisor of the Order of Rainbow for Girls, and past president of Kappa Teen sorority.

Betty Lorraine Hay Hayton, 82, of Billings, Oklahoma, was the daughter of David Hofmann and Verda Ellen Hayward Hay. She was born on August 18, 1927 in Shawnee, Oklahoma and died Saturday, October 10, 2009 at the Integris Bass Baptist Health Center in Enid, Oklahoma.

Betty attended school in Lucien and was a 1945 graduate of Perry High School, where she was a 1943 Football Queen Attendant and the 1942-1943 Band Queen.

Betty received her Bachelor of Science Degree in Home Economics from Oklahoma A M in 1949. She was a member of the Kappa Alpha Theta Sorority, Beta Zeta Chapter.

On May 26, 1950, Betty married Billy Gordon Hayton at the First Presbyterian Church in Perry, Oklahoma. He preceded her in death on January 30, 1995.

Betty taught school from 1949-1950 in Conway Springs, Kansas and then taught from 1969 until 1988 in the public school system in Billings, Oklahoma.

She was preceded in death by her husband and her parents.