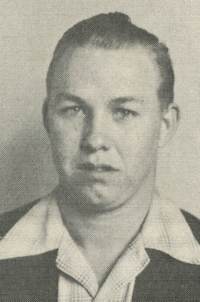 Palovik was the son of John P. and Charlotte Palovik and was born at Perry on April 14, 1928.

He was educated in Noble County rural and Perry schools where he was active in 4-H and FFA. He was the recipient of an FFA Junior Master Farmer Degree.

Palovik graduated from Oklahoma A&M in 1950 with a bachelor of science degree in agriculture economics. He was a veteran of the United States Army.

Palovik was manager of the Newkirk Farmers Coop from 1954-57, and later was senior vice president and director of Albright Title and Trust Company.

From 1979-90, Palovik was employed by the First National Bank and Trust Company where he was senior vice president and manager of the Billings branch.

His parents and one sister preceded him in death.