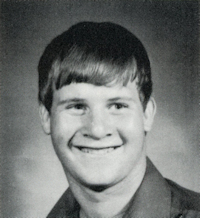 He was a 1982 graduate of Perry High School.

He will be remembered as a loving husband, son, father, grandfather, brother and friend, by all those who knew and loved him.