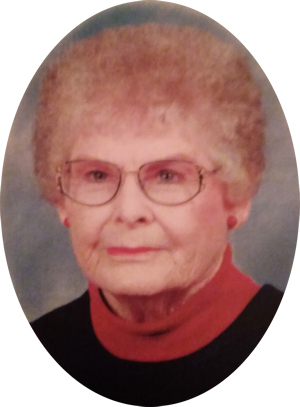 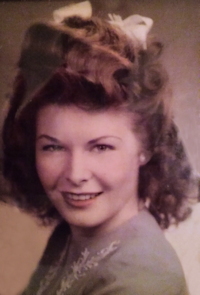 To speed the war effort along, Bessie Catherine Williams is planning to enter some sort of defense work after her graduation this spring. She is 17 years old, the daughter of Mrs. Etta Williams of 512 Firs street.

Bessie was born in Van Buren, Ark., but has called Perry her home for the past 14 years. She attended no schools other than Perry’s. A brother is employed by Boeing in Wichita and two others are in the U. S. navy.

A member of the national honor society. Bessie is president of her homeroom class.

﻿Bess Kime, 77, of Perry, was born on June 8, 1925, in Van Buren, Arkansas and died Saturday evening, September 21, 2002, at Integris Baptist Hospital in Oklahoma City, Oklahoma. She was the daughter of John Virgil and Etta Faye (Buster) Williams.

Bess was valedictorian of her 1943 graduating class at Perry High School. She retired as an insurance clerk for Charles Machine Works and was a member of the First Baptist Church where she was a Sunday School Teacher for 60 years. Bess enjoyed cats, bicycling and was an avid bowler. She won numerous medals in the Oklahoma Senior Olympics.

Her parents and eight brothers and sisters preceded her in death.