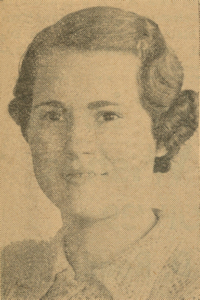 ﻿- daughter of Mr. and Mrs. Walter F. Jones of near Perry, will spend the rest of her years trying to “be a succesful housewife.” Her hobbies besides housekeeping are reading, swing music and collecting snapshots. She was born in Perry in 1922 and has always gone to Noble County schools. She was in the senior play and the operetta this year.

Visitation will be from 7:00 to 8:00 p.m. Thursday at the Cleburne Funeral Home.