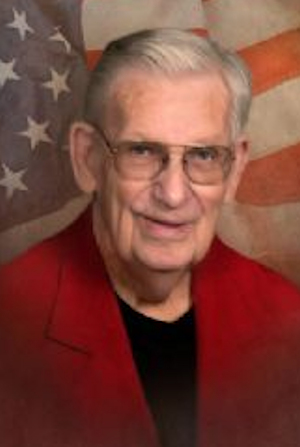 – was born in Stillwater 18 years ago. He is the son of Mr. and Mrs. A. A. Laughlin, 315 Seventh street and attended grade school at both Cushing and Perry.

He played football for two years and was a letterman.

Laughlin expects to enter the navy after his graduation from high school and hopes to attend college after the war is over.

Jim was born March 6, 1926, in Stillwater, OK to Arlo A. and Katherin Sechrest Laughlin.

Jim grew up in Noble County and he married the Love of his life Nadine Milliron on June 6, 1950, in Perry, OK and they made their home in Ponca City, OK.

Jim served a tour of Duty in the U.S. Navy, after his honorable Discharge he went to work for Conoco and he retired in 1981 with over 35 years of service. Jim enjoyed playing golf, traveling and fishing. He was also a past member of the Huff – Minor American Legion Post 14, Moose Lodge and the Masonic Lodge.

Jim was preceded in death by his parents and 1 grandson, Steven Laughlin.