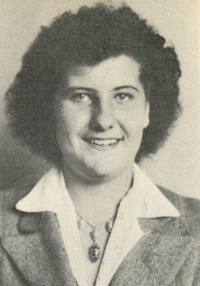 Mrs. Klein was born at Perry, Dec. 25, 1928, the daughter of John M. and Maude Steichen. She attended Rose Hill school and was a graduate of Perry high school. She and George Klein were married Nov. 11, 1950, at Perry.

A former teacher in rural schools, Mrs. Klein also had been a former employee of Noble County Abstract Co. She was a member of St. Rose of Lima Catholic church and had served as church organist for 42 years. She was a member of the Altar Society, Sunny View homemakers group, American Legion Auxiliary and Alpha Chi Study club.

Mrs. Klein was a past president of the Perry Band Boosters, was a Bluebird and Camp Fire leader for eight years, had been recognized by Boy Scouts of America for having served years as a Cub Scout and Boy Scout leader, and was named a Woman of the Month in 1978 by The Perry Daily Journal.

She had been recipient of the lifetime achievement award from the American Association of Meat Processors.