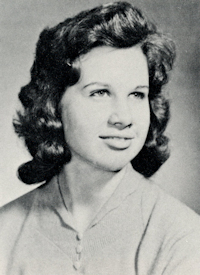 She was born July 27, 1943, in Perry, to Ray and Hazel (Winsworth), VanBebber. She received her early education in Perry and was a graduate of the Perry High School class of 1961. She was married to John H. Bode April 22, 1961. They lived in Del City from 1961 until 1967 and then moved east of Orlando to a farm that they had since resided on.

She taught many people the art of stained glass making. She was also involved three years with the Stillwater summer enrichment program for kids. She and her husband held demonstrations at several area schools on rock polishing.

Preceding her in death were her parents and one sister, Ramona.

Survivors include her husband of the home; one son, John R. Bode of Perry; two daughters, Lori D. Bode and husband, Ron Lomenick, of Perry and Jonene L. Cook and husband, Jeremy, of Stillwater; one sister, Wynona Passow of Perry; 10 grandchildren and two, great-grandchildren.

Serving as pallbearers will be John R. Bode, Leon Riggs and Jesse Blocker.

The family asks that in lieu of flowers, donations be made to the Oklahoma Lions’ Boys’ Ranch or to C.A.S.A.