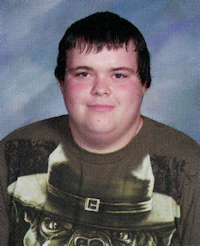 Eric Dwayne Hartung, 25, died on Sunday, January 15, 2017, in Hominy, Oklahoma. Public viewing will begin on Tuesday at 9:00 a.m. to 8:00 p.m. with the family greeting friends from 6:00 p.m. to 8:00 p.m. at Palmer Marler Funeral Home Chapel in Perry. Funeral service will be held on Wednesday, January 25, 2017 at 3:00 p.m. at the First Christian Church in Perry. Interment will follow at Grace Hill Cemetery. Palmer Marler Funeral Home is entrusted with arrangements.

Eric was born on January 5, 1992 in Enid, Oklahoma to Jeffrey and Shirley (Prince) Hartung. Eric grew up in the Perry area and went to Perry High School.

Eric loved to play video games and listen to his music. He had many pets throughout his life and loved his dog Panda. Eric was a big OU Football, Dallas Cowboys and Oklahoma City Thunder fan, and loved to wear his jerseys.

The family requests that friends wear a jersey to honor Eric’s Life.

Memorial donations may be made to the funeral home to help with final expenses at Palmer Marler Funeral Home, 203 E. Fir, Perry, OK. 73077.