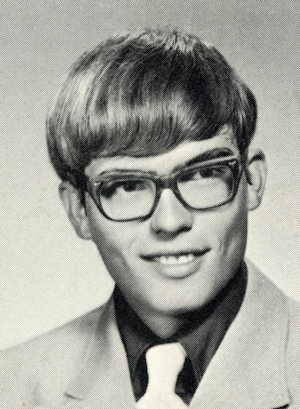 Graveside services will be at 2 p.m. Thursday at Grace Hill cemetery at Perry for Bernard Joseph “Joe” Bourgo, Jr., 23, Enid, formerly of Perry, who died in a two-vehicle accident at Southgate and Garland road, Enid.

Rev. Jim Underwood, Enid, will officiate at the graveside rites. Burial will be under direction of Henninger-Allen funeral home of Enid.

Born May 17, 1953, at Oklahoma City, Bourgo lived at Midwest City until moving to Perry. He was a 1971 graduate of Perry high school and had attended Northern Oklahoma college at Tonkawa. He and Dorothy K. Jones were married March 9, 1974. Well-known in the Enid area as an entertainer, Bourgo was lead singer for the musical group, “Groundstar.”

In addition to his wife, survivors include his mother, Mrs. Bobbie Buffington, his maternal grandmother, Mrs. Roy Easton, and his sister, Mrs. Vince (Pat) Edmondson, all of Perry.