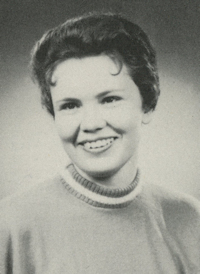 Qualls was born April 13, 1939, in Orlando to Fred and Martha (Baumgartner) Phelps. She attended school in Perry, graduating from Perry High School in 1957, and she remained a devoted Perry Maroon.

After high school, she attended Draughn’s School of Business in Oklahoma City, receiving her diploma in 1959. She then worked for American First Title and Trust and Southwest Canvas in Oklahoma City. After that, she worked for OSU for 16 years as senior secretary in the biochemistry department.

She loved her co-workers and her interaction with the many students she met and assisted throughout her years at OSU. In 1996, she received the Distinguished Service Award from OSU.

Her greatest joy was spending time with her grandchildren and watching her beloved OSU cowboys play ball. She will he missed by all those who knew her and loved her.

She was a member of Highland Park Freewill Baptist Church.

She was predeceased by her parents.