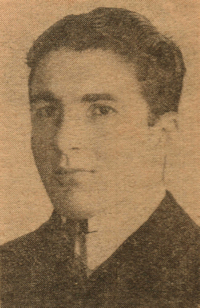 ﻿- was born in Perry and has always lived here. He is the son of Mr. and Mrs. H. W. Queen of 1301 Cedar street. In school he won letters in football and wrestling for three straight years. He received the silver football award. He likes to use a camera for a hobby and plans to continue his studies at some university or college.

Queen had taught school at Victoria, Texas; Ketchikan, Alaska; Mounds, Okla.; and had been employed by Charles Machine Works in Perry. Queen had served in the Army during World War II and was a member of St. Rose of Lima Catholic church. He was a member of the Knights of Columbus and Veterans of Foreign Wars.

He was preceded in death by three brothers.