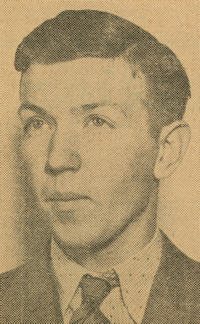 He has attended the Perry schools for the past 12 years. He served as president of his home room during the freshman year, and is a member of the First Baptist church. He has participated in track events during his school career.

He was awarded first prize in a Poppy poster contest.

Hobbies are building and remodeling furniture.

Eugene plans to go to Stillwater and take a course in National defense work.

While in high school and before joining the Navy he delivered milk for Kelly Dairy and was employed by Eby Cleaners.

He served as a Carpenter’s Mate Second Class in the U. S. Navy during WWII. While on leave between duty stations, on March 07, 1944, he married his high school sweetheart, Catherine ‘Louise’ Hoskins (a 1943 graduate of Perry High School ). They were married for sixty-one years before death took him.

They left for California and his new duty station on Coronado Island, After completing his military service and receiving his honorable discharge they returned to Perry.

They lived for a short time in Kansas. He eventually moved their growing family to Anaheim, in southern California where he was employed by Lear Jet Corporation.

He had a talent for drawing and wood work, while in high school he designed the covers for many of the school assembly programs, National Honor Society, Home Economics clothing style shows, the Jr. Sr. Banquet programs. He helped build and paint scenery for the class plays, designed decorations to decorate the gymnasium for the Jr.-Sr. Banquets. With this talent he could often be found in his garage where he built many beautiful pieces of furniture as well as objects of art.

He was also a Gardner. Each year he loved to present his wife with the first strawberry of the season.

A member of the First Baptist Church of Anaheim he was a loving husband and a devoted father.

In keeping with his quiet ways, he died at home, peacefully in his sleep, on July 07, 2005. He was buried at Harbor Lawn Mt. Olive Cemetery in Costa Mesa, Orange County, California.

He was preceded in death by his parents and a brother Charles Lee Wilson of Texas in 2000.