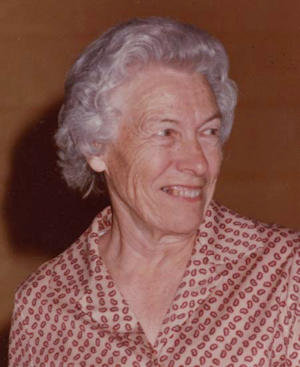 Funeral will be at 2 p.m. Tuesday, at Christ Lutheran church. Rev. Myron C. Maltz, pastor, will officiate. Burial will be in Grace Hill cemetery under direction of Brown Funeral home. Casket bearers will be Richard Kukuk, Allen Piel, Terry Leonard, Raymond Decker, Bobby Beier and Jim Kukuk. Memorials may be made to Christ Lutheran church or the Oklahoma Medical Research Foundation.

Mrs. Ehler was the daughter of Fred and Anna Kukuk and was born at Perry, Dec. 11, 1909. She attended Whipple and Christ Lutheran schools and was a graduate of Perry high school.

She and Floyd Ehler were married in Topeka, KS, on April 25, 1942. The couple made their home in the Bressie community prior to moving to Perry in 1966.

Mrs. Ehler had worked as a nurse in Perry. She was a member of Christ Lutheran church and the Columbine Garden club.

She was preceded in death by her parents, husband, one sister and six brothers.