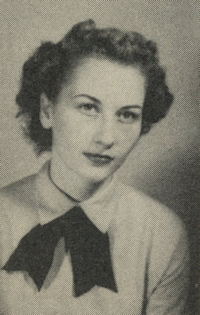 We lost a remarkable business woman, philanthropist, mother, wife & friend when Nelda Turner passed from this earth early last Friday to be with those she loved that passed before her.

Born in Rusk County, Texas on July 4, 1932, her family moved numerous times before settling in Perry, Oklahoma where she married her high school sweetheart, Tom Turner. After moving several times due to her husband’s career, they made their home in Muskogee.

Undaunted by job rejections when told that women were hired as bookkeepers, not as accountants, she created her own professional future by purchasing an H & R Block franchise. She had to enlist the help of her husband to purchase the business, as this when a woman was not able to own property without the permission of her husband. However, once the small struggling franchise was hers, she built it into the largest independently owned H & R Block franchise throughout Texas & Oklahoma.

Concurrently as she managed the Block office, she was the driving force that convinced her husband that they should open the Golden Dipper Ice Cream Store. It was through “The Dipper” that numerous teenagers, including her six, referred to their boss as “Mrs. T” and were influenced by her strong work ethic.

She was a stern but loving mother. Her house and kitchen were always open to kids of all ages that called her “Mama T.” During the summer, it was common to find a dozen or more napping in the den between two-a-day’s, or congregated around her kitchen table for lunch.

She celebrated life by sharing with those less fortunate. Active in the community, she was dedicated to mentoring young women through Soroptimist International, as well as serving as a managing participant of the Ark of Faith. Quietly and privately, she assisted many local families she felt were in need.

She left behind her best friend and devoted husband of 57 years, Tom Turner. She was preceded in death by their son, Tommy Junior in 1967. She is survived by her only sister, Billie Galaway of Oklahoma City, as well as three daughters, Kym Turner, Jaque Jordan and husband Jan, and Toy Turner Woods and husband Dr. Stuart Woods; and three sons: Logan, Michael, and Timothy Allen and wife Charlene. Grandchildren from Muskogee include Jared & Erik Jordan, JoAnna & London Wren Woods, and Amos & Eva Allen, and also Jonathan & Nicole of hominy and Michael, Jr. & Maldina, in addition to numerous God children.

All of those that wish to honor her life are invited to attend the memorial service being held at 2:00 o’clock p.m. on Tuesday, May 13th, at Grace Episcopal Church. In lieu of flowers donations may be directed to the Ark of Faith.