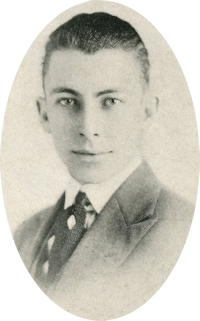 Charles Newton, 26 years old, died at 12:30 o’clock early Wednesday morning at the Wesley hospital in Oklahoma City, as a result of an abscess of the brain.

Born March 11, 1903, in Perry, Oklahoma, he was the son of George Augustus and Dorcas (Stephens) Newton. Following his graduation from Perry High School in 1921, Newton attended Oklahoma A & M college at Stillwater, where he was a member of the Kappa Alpha fraternity.

At the completion of his education Newton began working for the Kansas City Life Insurance Company in Kansas City, Missouri. In 1925 he and Kathryn Elizabeth Nixon were married. They lived in Oklahoma and he worked as an accountant.

They were all present during his final illness, operation and death.

Funeral services will be held at 2 o’clock Friday afternoon from the Street & Draper chapel, at Oklahoma City. Rev. H. M. Woods, former pastor of the Christian church of Perry, and pastor at Oklahoma City, will be in charge of the services. Interment will be made in the Memorial Park cemetery, seven miles north of Oklahoma City.