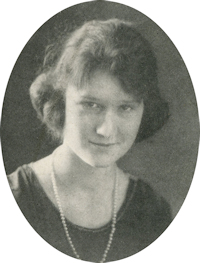 Mrs. Schump was born Sept. 14, 1904, at Perry, Oklahoma, to Charles Arthur and Lulu Ann (Dotts) Harbaugh. She graduated from Perry high school in 1921 and continued her education at both Kansas University and Oklahoma University. While at Oklahoma University she was a member of the Zeta Tau sorority and represented the sorority on the Pan-Hellenic.

She became a teacher in Perry and taught 4th grade followed by Latin and Spanish at the high school. During the 1926-27 school year she went on an adventure to Puerto Rico to teach 8th grade English. She taught in Arkansas City, Kansas, before her marriage to William M. Schump on March 6, 1943, in Enid, Oklahoma. Mr. Schump was associated with the Rock Island Railroad at Herington, where the couple made their home and she taught high school Spanish for 20 years.

She was a member of St. John’s Catholic Church and Altar Society, P.E.O., Domestic Science Club, and Tri-County Historical Society.

The funeral will be at 10:30 a.m. Tuesday at St. John’s Catholic Church, the Rev. Donald Pfannenstiel officiating. Burial will be in St. John’s Cemetery. Memorials may be made to the church.