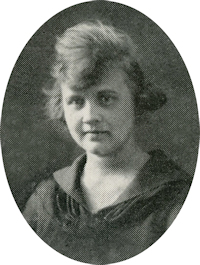 Mrs. Krisher taught school in Perry, and was a longtime nursery school teacher in Midwest City. She was a member of the First Baptist Church of Midwest City, where she worked with primary school children, and was also a member of Eastern Star, the American Legion Post 170 Auxiliary, and the Veteran’s of WW I Auxiliary.

She was always positive, cheerful, and full of love. She enjoyed many things, such as music, playing piano, flowers, animals and entertaining others. She even won the “Miss Congeniality Award” at her nursing home. She was an excellent homemaker and mother, and dearly loved her friends and family.

Besides her husband, Mrs. Krisher is preceded in death by a daughter, Ruth Yvonne Krisher.

Funeral services will begin at 2:00 p.m. Monday, October 21, 1996 at the First Baptist Church of Midwest City, with burial following in Arlington Memory Gardens.