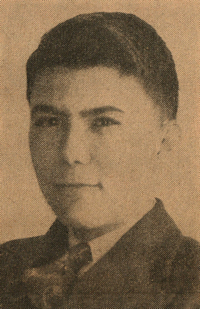 ﻿- is interested in following the air trails after graduation. He did not indicate where he would study aviation. He was a wrestler in high school. He appeared in the operettas, the senior play and was a member of the band. He attended St. Joseph’s Academy and Perry High School. He is the son of Mr. and Mrs. H. W. Schurkens of 817 Jackson street. He is a native of Perry and has worked for some time at Brownie’s Drug Store. He collects stamps for a hobby.

Double funeral services were held at 10 a.m. Monday at the St. Rose of Lima Catholic church for Leonard “Jack” Schurkens and Marvin Dauman, Perry youths who died Saturday morning near Ponca City in an automobile accident. Dorothy Jean Dale, 16, and Ada Robison, 16, also perished in the accident. Burial for Schurkens and Dauman was in the Catholic cemetery under joint direction of the Newton and Davis funeral homes. Father William Reid officiated.

Jack Schurkens was the son of Mr. and Mrs. Henry Schurkens, Perry, and had lived here all his life.

He was an accomplished golf player and had won a number of amateur awards.

He is survived by his parents and one sister, Phyllis, who is attending A. and M. college.