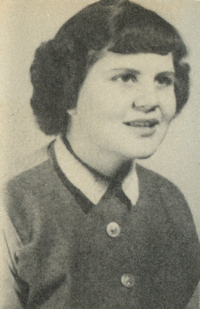 Mass of Christian Burial will be held at 10 a.m. Wednesday, Jan. 29, 2003, at Sts. Peter and Paul Catholic Church in Kingfisher with Rev. Price Oswalt and Rev. Edward Weisenburger officiating. Burial will follow at Holy Trinity Cemetery, under direction of Sanders Funerals Service.

She was born June 11, 1936, in Perry, OK., to Worth and Agnes Roberts. She graduated from Perry High School in 1954 and received her diploma in nursing from Mercy School of Nursing in 1957.

She began her nursing career at the old Mercy Hospital. She then moved to Griffith Memorial Hospital in Norman, Altus Oklahoma Hospital, then to Madera County Hospital in Madera, Calif. She returned to Oklahoma and worked for Pawhuska, Perry, Fairfax and Kingfisher
hospitals. She retired from nursing as the director of Second Shamrock Nursing Home in 1992.

She was a member of Sts. Peter and Paul Catholic Church.

She was preceded in death by her parents, one daughter, two sisters, and two brothers.

Memorials may be made to Oklahoma Medical Research Foundation for liver research.