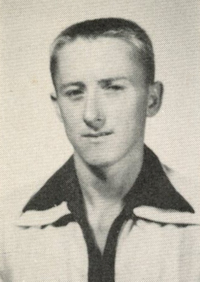 Funeral services for Harold H. Brothers, 75, of Purcell, formerly of Norman, were held Nov. 13, 2009 at First Baptist Church in Lexington with the Rev. Rusty Canoy officiating. Interment was at the Rose Hill Cemetery in Oklahoma City.

Harold was born July 27, 1934 to Henry and Pansy Mae (Reynolds) Brothers in Hooper, Colo. At an early age, they moved to Perry, Okla., where Harold started school in the third grade, graduating from there in 1952. While in high school, he participated in many activities including football, baseball and basketball. He had a superb singing voice and played in the band until he was forced to make a decision, and he chose football.

In 1952, Harold enlisted for active duty in the U.S. Naval Reserve. After completing his training, he was assigned to the USS Fulton. When not at sea, Harold pitched for the ship baseball team in the old “Class D” Pro League. After his military service, Harold returned to Oklahoma and started class at Southwestern Oklahoma State University where he became a member of the baseball team. He earned his Bachelor of Science Degree in Education in 3-1/2 years. Harold’s first coaching and teaching job was at Colony, Okla., where he coached baseball, basketball and softball for boys and girls. He later went on to coach the American Legion.

In 1963, Harold was recruited by Fidelity Union Insurance Company and remained in the insurance industry for more than 46 years. Harold has been blessed to be a member of First Baptist Church of Lexington where he served as a Deacon and enjoyed singing in the choir and playing his harmonica.

Harold had a personal concern that the cost of college education was becoming too expensive for middle and lower income families and their children who graduate from Perry High School. In 1987 Harold shared his concern at a class reunion along with an idea to give something back to the Perry community. His idea was to start an Alumni Association to find and promote ways to establish a scholarship fund for PHS graduates who were interested in continuing their education after high school. His concern for students of Perry High School was spark that birthed the Perry High School Alumni Association we have today.

He was preceded in death by his father, Henry Brothers; mother and stepfather, Pansy and Wilbur Toone and two infant siblings.

Harold is survived by his wife, Sue of the home; his daughters, Brenda Wright and husband, Robert, of Oklahoma City and Brooke Marlow and husband, Jerry, of Purcell; and his sons, Brad Brothers of Purcell and Hank Brothers of Mustang, Okla.

The family requests memorials be made to the Falls Creek Account, First Baptist Church of Lexington, P.O. Box 507, Lexington, OK, 73051.