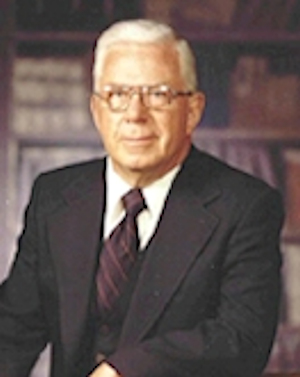 Although Gene grew up in poverty during the depression years, he became one of the most successful grads in PHS history. The first Eagle Scout in Noble County, he continued his education after graduating PHS, earning a B.S. at OSU in Business Administration. During World War II, he served aboard a destroyer escort as a naval officer that was torpedoed and sunk in the North Atlantic. He (obviously) survived and used the GI Bill to obtain his M.S. from OSU and then a Doctorate in Philosophy at Stanford University.

This PHS alumni who said “The way to get to the top is to get off your bottom” became Dean of the College of Business and then Vice President at OSU as well as President of Tulsa University — and didn’t stop there. As President, then CEO, and eventually Chairman of the Board of the National Bank of Tulsa, he helped develop it into the largest banking institution in the state (now the well-known Bank of Oklahoma).

After retiring at the age of 60, Swearingen went on to become President of ORU after they met his “salary demands” for an annual salary of $1.00. Although retired from banking, he remained active in other areas, serving as a consultant to Kerr-McGee and on the boards of Parker Drilling Co., First Bank of Trust of Perry, Charles Machine Works of Perry, Local America Bank of Tulsa and as a Regent for Higher Education.